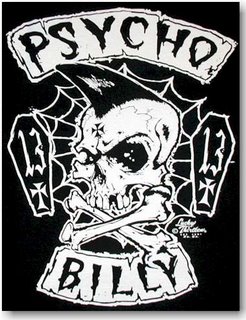 Psychobilly is a genre of music generally described as a mix between the British punk rock of the 1970s and the American rockabilly of the 1950s.
The genre is characterized by lyrical references to horror films, violence, exploitation films, lurid sexuality and other topics generally considered taboo — sometimes presented in a comedic, tongue-in-cheek fashion. Psychobilly music is generally played with an upright bass instead of an electric bass.

Origins
The term psychobilly was first used by Wayne Kemp when he penned the Johnny Cash song One Piece At A Time, a Top 10 hit in 1976. Although the song is not musically categorized as psychobilly, the lyrics refer to a “psychobilly Cadillac.” The term came into use as a music genre a few years later, when the Cramps described their music as “psychobilly” and “rockabilly voodoo” on flyers advertising their concerts. Although the Cramps rejected the idea of being a part of a psychobilly subculture, they — along with artists such as Screamin’ Jay Hawkins and the Stray Cats — are considered important precursors to psychobilly. Musically speaking, there are also antecedents in the garage rock genre of the 1960s and the pub rock scene of the 1970s.
The Meteors, who formed in South London in 1980, are considered the first verifiable psychobilly band. One member was part of the rockabilly subculture; another was part of the punk subculture; and the other was a horror movie fan. Their musical and lyrical ideas overlapped to create psychobilly as it is known today. The Meteors invented the idea that psychobilly should be apolitical, by encouraging their concerts to be “politics-free” zones to avoid disputes among fans, as was common in the punk rock scene of the time.